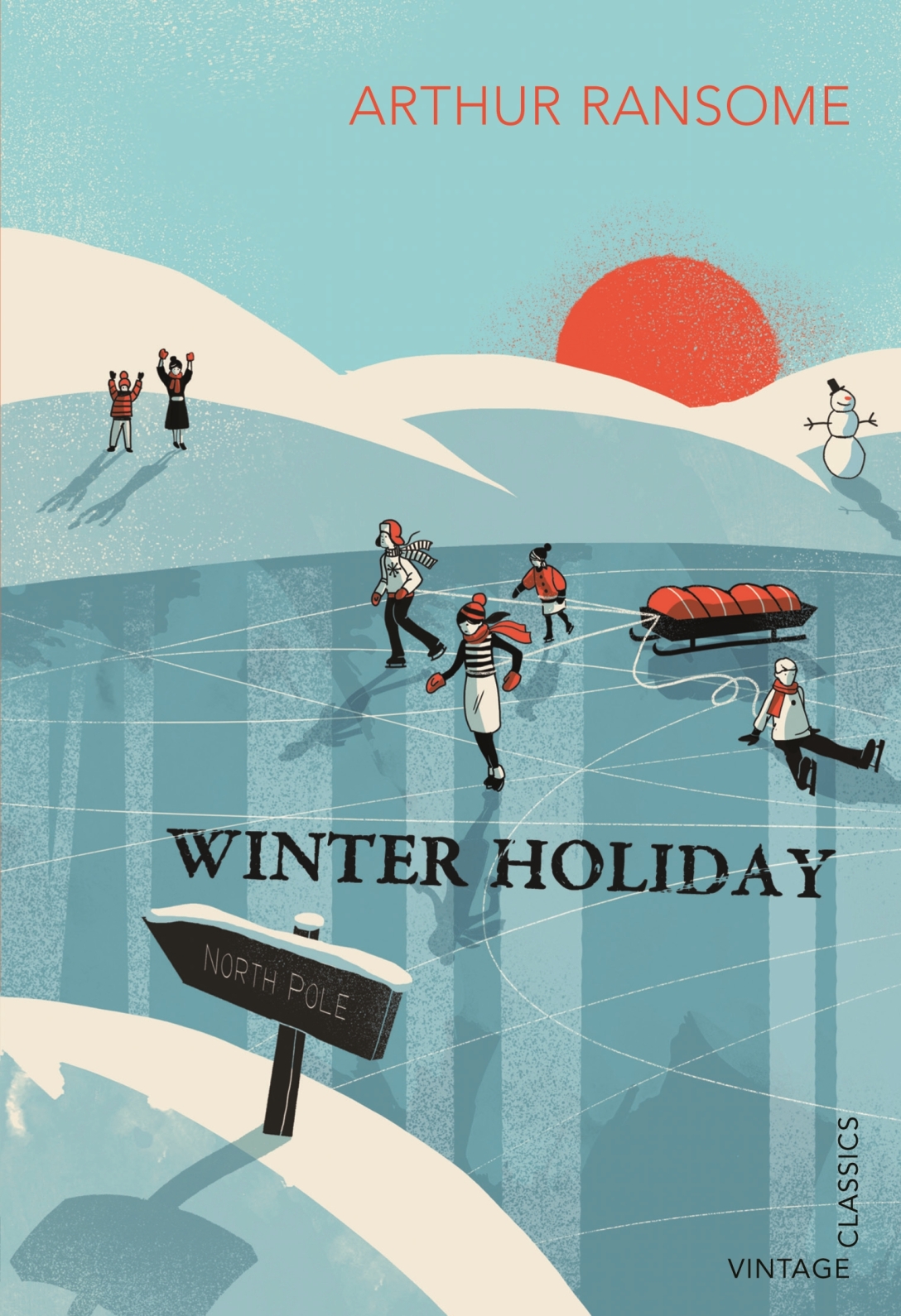 Now December is looming it’s time for a re-read of Winter Holiday. I didn’t read Arthur Ransome’s Swallows and Amazons books at the age you’re supposed to read them, but I’m making up for it now. I love all twelve books—pure comfort reading—but Winter Holiday is probably my favourite or at any rate equal favourite with Great Northern? (The question mark is part of the title, not clumsy typing). There’s no sailing in Winter Holiday; instead the children and young teens have set themselves the project of reaching the ‘North Pole’ by ice, and (a little shockingly on a first read) we begin at one remove from the familiar characters of the first three books, in the company of two newcomers, Dorothea and Dick Callum (The Two Ds). They are town children staying in the Lakes while their parents are away working on an archaeological dig.

Back in the very first book, the Swallows (John, Susan, Titty and Roger Walker) met the Amazons (Nancy and Peggy Blackett) in robust equality and formed their friendship out of a battle. The Two Ds are not nearly so rough and ready—a polite, romantic girl and a bespectacled boy—and so the story of Winter Holiday is partly one about acceptance. I think the Ds give an extra layer to the story-telling, especially through Dorothea. You’re no longer as reader the only one staring into the amazing world of Nancy and the others; Dorothea is in a similar position, a girl on the outside, drawn to the adventures she sees the Swallows and Amazons living, and sensitively aware of the difficulties of joining in.

On the first morning of their holiday, the Ds watch the Swallows and Amazons from afar as they row to an island that we recognise as Wild Cat Island where they practice signalling. Seeing the six at home in the place changes Dorothea’s mood from one of excitement in her exploration of the unknown setting to a feeling of exclusion. Her feelings are always enlarged (or deflected) into imagination; instantly she starts a story in her head about a brother and sister stranded in the wilderness, eating their very last morsel. But scientifically-minded Dick has a different relationship to the world, characterised not by imagination but by experiment:

‘What’s the good of thinking about them?’ said Dorothea. ‘They might as well be in some different world.’

Dick started so sharply that he almost dropped his telescope. ‘Why not? Why not?’ he said. ‘All the better. Just wait till dark and we can try signalling to Mars.

‘Why not?’ said Dick. ‘Of course they may not see it. And even if they do see it they may not understand. A different world. That makes it all the more like signalling to Mars.’

‘We’re going to be late for Mrs Dixon’s tea,’ said Dorothea, and a moment later they were down those steep stone steps and hurrying home. As she ran down the cart track beside him, Dorothea was thinking. You never knew with Dick. He always seemed to be bothering about birds, or stars, or engines, or fossils and things like that. He never was able to make up stories like those that came so easily to her, and yet, sometimes, in some queer way of his own, he seemed to hit on things that made stories and real life come closer together than usual.

Unlike his sister, Dick is not anxious to be accepted by the others. He’s absorbed by his interests, whether geology, astronomy or ornithology. He often doesn’t even hear when he’s spoken to or takes a time of bewildered readjustment to emerge into the present. He can seem rude or abrupt through not comprehending that others aren’t as fascinated by his subjects as he is. Dorothea touchingly understands and defends him. A lot of her anxiety about being accepted is on Dick’s behalf, even while he is oblivious to those concerns.

Winter Holiday was published in 1933, meaning a diagnosis of Asperger’s was not possible because the diagnosis didn’t exist. It wasn’t until 1944 that autism was clinically described; Asperger’s the following year, so this is (or may be) Ransome’s fresh and direct observation of a way of being that at the time had no name and no formal delineation. That Dick is an Aspie is, of course, pure conjecture and entirely unverifiable. He strikes me as an Aspie (as for that matter does Mr Dixon, the shy farmer with whom Dick establishes a friendship) but it’s somewhere between poignant and exciting to find a possible in-the-wild account that is just in advance of the medical description.

In any case, I love the fact that the studious boy is in time fully integrated into the exuberant group. In fact his ideas frequently give their adventures content and shape.

Ransome’s stories have a different dynamic to those children’s books where a fantasy world of monsters, myth or magic is inhabited by deliberately ordinary characters. (I’m thinking of Hogwarts here.) In Ransome’s books, the children themselves are responsible for the transformation of their world. Of course, they are fortunate to have the English Lakes (or the Norfolk Broads in some books) as backdrop, and their absent or carefree parents are an asset too. But it’s the collective imagination of the group that creates the adventures they live, whether they’re currently pirates, Arctic explorers, gold miners or Picts.

Here’s a quick example of something that happens constantly. The plan to reach the North Pole (actually the other end of Lake Windermere) needs an empty wilderness but instead, when the children reach the ice, they find adults have also rushed to the frozen lake: ‘They nearly turned back when they first saw the crowds [. . .] The ice round the steamer pier and out beyond Long Island was black with skaters.’ It takes a few moments for one of the children to come up with the invention that rescues the expedition:

People were going about selling roasted chestnuts. Everywhere in the bay were skaters, flying along arm-in-arm, or singly, or turning in circles, figure-skating or dancing.

It was the only thing to do. Unless they were to count all these hurrying, laughing, shouting, grown-up skaters as seals or walruses, or something like that, it would be impossible to make much of an Arctic out of the crowded ice.

This inventiveness is the key joy of the books, and the thing that stops them just being tales about middle-class kids with sailing boats. As a contemporary reviewer of Swallows and Amazons (1930), Malcolm Muggeridge wrote, ‘The story of their adventures on a little island in the middle of an English lake is thrilling just because it is not fabulous [. . .] It is make-believe such as all children have indulged in: even children who have not been so fortunate as to have a lake and a boat and an island but only a backyard amongst the semis of Suburbia.’) It’s imagination not as a solitary pursuit (like Dorothea’s stories) but out in the open, spoken out loud, susceptible to change, and energetic. Once planted, the seals suggestion grows so that before long the annoying adults actually add realism to the scene. Peggy takes up the idea: ‘The seals’ll just hang about the Eskimo settlements. They always do.’

I don’t want to give the plot away. There’s a plague, some subterfuge, a desperate rescue mission (two of these, in fact), and a near-death experience. I love the episode with the cragfast sheep (or Polar Bear) and the way it shows the distinctive characters of the Two Ds. Dick is both incredibly brave in the rescue of the animal and matter-of-fact, silencing his fears by science; and later it goes through my heart when Dorothea interprets the hammering she hears at night to be the men making a coffin for the sheep. (Spoiler at the foot of this piece.)

The book is more tightly structured than some of the others in the series, held together by the children’s semaphore and signalling. The messaging works brilliantly but it also provides the point of confusion that sets in motion the final dramatic dash for the North. In the last chapters, imaginary adventure becomes real danger for the two Ds, and, as a result, ‘a million times better’, as Nancy exultantly claims.

If this blog survives my laziness, I’m slowly and intermittently going to review each and every one of these books. (You’ll be lucky if I don’t do them all twice.)